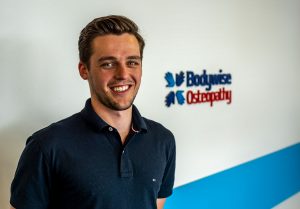 Dr Arie’s interest in osteopathy was initially inspired through the improvements he experienced from the treatment of his own injuries sustained in his promising junior athletics career. Although ultimately not realising his childhood dreams of representing Australia, he did however pursue his love of osteopathy and completed his qualifications in Melbourne at Victoria University, with a Bachelor of Science and a Masters of Health Science.
Dr Arie has extensive history working with elite athletes and a stint at the Western Jets Football Club in Melbourne, provided him extremely valuable experience in the field of ‘Exercise Rehabilitation’ and diagnosing and treating sports injuries. During his time there Dr Arie’s osteopathic skills were a highly sought after intervention for the strength and conditioning team in the management and prevention of further injury of their elite athletes.
Since becoming an Osteopath, Arie has been encouraged by the positive effect Osteopathy can have on the lives of all members of the community, from office workers, athletes, weekend warriors, chronic pain sufferers and the elderly.

Arie aims to provide a personal treatment approach that is tailored to be best suited for you, the patient, and will be based on a variety of hands-on osteopathic techniques. Some of these may include; trigger point release, specific soft tissue release and stretching, mobilisation and manipulation (joint clicking), all of which are designed to bring the systems of the body back into harmonious balance and optimum function.

In his chill time off Dr Arie likes to hit the gym and keep a keen eye on the AFL season.

If you would like an appointment with Dr Arie, please phone Bodywise Osteo on 1300 321 300 or hit the book now button for his online bookings.