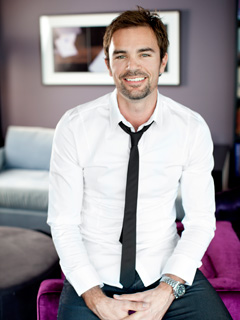 Anthony’s osteopathic approach is designed to suit the needs of you, the patient. He utilises a variety of hands-on therapy techniques including trigger point release, stretching, manipulation, mobilisation, massage and acupuncture. He promotes exercise and conditioning to rehabilitate patients and prevent re-injury.

Anthony’s approach is suitable for patients of all ages, from toddlers, to sporty teens, weekend-warriors and the older aged and he is fully registered with the Osteopathic National Board and with the Australian Osteopathic Association.

Anthony attained his qualifications in Osteopathy at Victoria University in Melbourne.

In 2000 Anthony worked with the New South Wales Institute of Sport Cycling Team, under head coach Gary Sutton. In 2001 Anthony was invited to Dublin, Ireland, to lecture in Osteopathic Medicine at The Institute of Physical Therapy and Applied Science.

During his time in Dublin he founded and Directed one of Dublin’s leading Osteopathic clinic’s ‘The Spine Clinic’. In 2010, Anthony could no longer endure the 300 plus days of cloud cover Ireland provided and sunnier climes were beckoning. In a bitter sweet move, Anthony sold out of his creation, The Spine Clinic, and returned to his beloved Australia, where he took over as new owner of the long-establised Bodywise Osteopathy.

There were some exciting experiences for Anthony during his 10 year European sojourn, including in 2008, a stint with the highly decorated Australian Track Cycling team in Bordeaux, France and later that year at the pre-Beijing Olympic campaign in Buttgen, Germany.

The occasional celebrity has also crossed Anthony’s path in his time abroad too- and he tells a funny story of his call to treat “one of the stars of the film, Alexander”. Alas- it wasn’t Angelina Jolie! But it was a still a big thrill for Anthony to introduce actor, Val Kilmer, to the benefits of Osteopathy.

In 2010, after ten fulfilling years in Ireland, Anthony returned to his homeland and more importantly to The Sunshine State. Upon returning he took over as the new owner and senior practising osteopath at South Brisbane’s Bodywise Osteopathy.

On a personal level Anthony Collins is a keen cyclist and he loves (and hates) to cycle around Brisbane’s beautiful hills. Anthony also has a high level of interest in salsa dancing, skiing and scuba-diving and you may even see him trying to ‘practice what he preaches’ at his local gym!